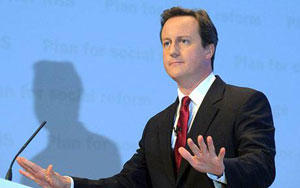 The delivery of next-generation broadband will help to return the economy to growth, the Prime Minister has said.

David Cameron has hailed the government’s super-fast broadband target as one of its “big plans” to transform the UK’s infrastructure and return the economy to growth.

In an upbeat new year message, the Prime Minister acknowledged “much needs to change” if the economy is to be brought back to health. The rollout of next-generation broadband, the construction of new homes and the building of better roads and railways are all improvements designed to achieve this goal, he claimed.

Mr Cameron said: “This will be the year Britain sees the world and the world sees Britain.”

“It must be the year we go for it – the year the coalition government I lead does everything it takes to get our country up to strength.”

“I profoundly believe that we can turn these things around.”

The conservative-led coalition has regularly stated it’s aim to deliver the super-fast broadband network in Europe by 2015, although it has stopped short of specifically defining this target.

However, in order to achieve this goal, it has been allocated £530 million freed up from the BBC licence fee to fund the deployment of faster broadband services in parts of the UK that are unlikely to be included in private sector rollout plans.

Furthermore, a £100 million cash pot was recently announced to create up to ten “super-connected cities” across the UK, with ultra-fast broadband services and advanced mobile connectivity.

Criticism has been levelled at the government for failing to advance it’s broadband plans sufficiently, with the Countryside Alliance revealing in December that work is yet to get underway at the country’s four super-fast broadband pilot sites, despite them being identified in October 2010.

In a bid to speed up the process, Culture Secretary Jeremy Hunt has announced local authorities in England must submit their broadband proposals by the end of February or stand to miss out on state aid.